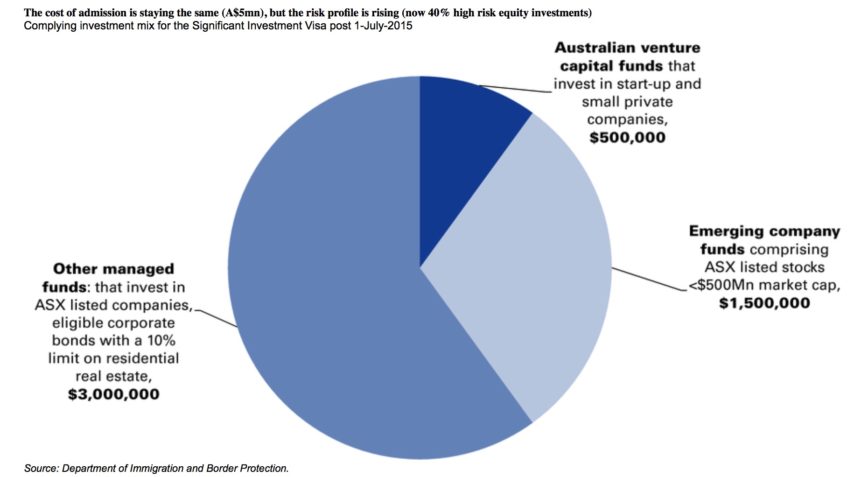 More recently though, as published in the Australian Financial Review, we are seeing a dramatic reduction in applications for the visa since new changes to the rules governing the SIV were introduced in July 2015. New figures show that since July 2015 only 47 applications have been lodged in comparison to the previous SIV regulations which, on average, saw 50 applications made per month (AFR).

Under the new scheme, a minimum of $5 million must be invested in various allocations within Australia; 10% must go to approved venture capital funds, 30% into listed emerging small companies and the remainder can be allocated to corporate investment, infrastructure funds, AREITs, corporate bonds and deferred annuities (AFR). The graph above illustrates the required investment allocations further.

The shift from the previous investment structure, which allowed investments in government bonds and residential property, towards higher risk venture capital products (requiring 40% high risk equity investments) has no doubt played a role in the reduction of applications post July 1 2015.

In addition to the reduction in Visa applicants, we’ve seen controversy regarding the program emerge over the past year. A number of people, business publications and even the governments research agency have called for the SIV to be scrapped as it provides little to no economic benefit to the community aside from fund managers (Bloomberg). The Productivity Commission stated in a draft report “The economic benefits of the buy tadalafil safely online Significant Investor Visa and Premium Investor Visa streams accrue mainly to the visa holder and to fund managements” adding “The benefits to Australian businesses seeking investment and the economic benefits to the broader Australia community are likely to be very small or non-existent” (Bloomberg).

The Significant Investor Visa will be one to watch throughout 2016 and we will continue to document changes that take place over the next few months.